Home » Chop Saw vs Miter Saw – Which One Do You Need?

The chop saw and miter saw are usually mistaken for one another. And even though it is true that they boast confusing similarities, these two tools come with significant differences. In fact, these are what make one tool more appropriate and effective for specific purposes than the other.

So, in order to set the record straight, I decided to come up with this comprehensive post. We will discuss in brief the differences and similarities between the two. I will also divide the differences section into four categories. These include the product’s function, characteristics, appearance, and applications.

But before we get there, let us start by defining the two products. This section will be particularly crucial if you intend to pick one among the two after this post. Always remember! In the woodworking industry, using the wrong tool will immensely waste your time.

Worst yet, it could pose a safety risk and cost you lots of your hard earned money and efforts in the long run.

With that introduction in mind, let us define the two products.

What is a Chop Saw?

Defined briefly, a chop saw is a huge, and quite powerful power tool used to cut through basically everything. The tool can cut through steel, metal, as well as wood. It also uses an abrasive disk that doesn’t come with teeth for its blade. It quickly delivers the cut by spinning the disk extremely fast.

If you intend to make straight, 90 degrees cuts on your products, then this is the product for you.

And as I just mentioned, a chop saw is a hardy machine that can cut through everything. And therefore, they are mostly used by a wide array of plumbers, construction workers, carpenters, and more. From the list of individuals who use the product, you can tell it was designed with professionals in mind.

What is a Miter Saw?

A miter saw, on the other hand, is an average-sized tool which uses a circular blade to make its cuts. A miter saw can also execute bevel cuts, angled cuts, and an amalgamation of both. This combination is usually known as compound cuts.

It is a finesse power tool usually utilized for its precision. Particularly when it comes to delivering angeled and straight curves in order to add final touches to small tasks and projects.

Due to their function, Miter saws are handy tools to include in your workshop if you are a hobbyist or a DIYer. Other features that make it the best for DIYers is the fact they’re precise and easy to operate.

I hope you know what the two products are, who is supposed to use them as well as their pros and cons.

Now here comes the section you were waiting for. Let us look at the features that set apart the two products.

Chop Saw vs Miter Saw – What are the differences between them?

When you first set your eyes on the two products, they look the same in a lot of ways.  Both tools retail with round blades that have been fixed on a stationary base and a hinged arm. These are what support the materials you are working on.

But note, when it comes to appearance, these two power tools actually have more features that differ compared to those they have in common.

For instance, a chop saw retails with a larger blade and a bigger motor compared to a miter saw. This is mainly due to the fact it is mostly used for cutting hard materials such as metal.

A miter saw, on the other hand, comes with a smaller motor and blade. This is because the tool is designed to cut wood. And the fine blade is more ideal for making cleaner cuts on finished wood products as well as cutting smaller molding pieces.

Still on appearance, a chop saw boasts an abrasive disk. This disc looks like a thin grinding wheel. And it is used to perform the cutting action. The power tool also comes with its cutting wheel and motor mounted on a rotating arm. The rotating arm has been connected to a secure base plate.

A miter saw, however, consists of a laser guide which ensures precise positioning of the cut you would like to execute. A miter saw also includes a blade guard that covers the teeth of the cutting blade. Other features you will notice on a miter saw are the dust bag and a safety clamp.

The dust bag helps keep the tool clear of sawdust. The safety clamp, on the other hand, is important as it keeps the tool firmly locked in place during operations.

A miter saw also retails with a miter index. This can be easily adjusted to change the angle of the blade relative to the miter table and fence. The miter table is usually 24 inches in diameter.

Industrial chop saws are typically faster and should only be used by seasoned professions. These power tools are also operated using two hands. Using two hands is particularly crucial when you are feeding lumber through the saw. You will likely also need to use your knee and foot in order to control the switch with hydraulics.

Miter saws, on the other hand, retail in different types. There is a manual miter and power miter saw. Power miter saws can also be classified as compound, standard, and sliding compound miter saws.

The power miter saw is a real time saver. Mainly because it will allow you to execute repetitive and precise vertical angled and straight cuts on moldings or lumber.

This sort of miter saw is also commonly utilized for cutting of moldings and framing operations. It’s also relatively portable and small with blades ranging from eight to 12 inches.

The manual miter (AKA hand operated miter) is the type no one can confuse for a chop saw. This tool retails with no motor and it relatively slower compared to a power miter saw. In addition, just like the chops saw, the manual miter saw can also accurately cut 90 degrees angles. But you can also use it to make simple angles since it’s handheld.

Just like the standard miter saw, the blade of a compound miter saw swivels as well. But it can also slant sideward in order to create compound angels. Professional woodworkers usually use this sort of saw because of that feature.

Point to remember.  Miter saws and chop saws with blades that enter the wood from above are referred to as drop saws. The other sort of saw you can also use as a miter saw is the radial arm saw. This slides horizontally across the wood.

A major distinction that you will notice these two tools have right away is the axis. The chop saw’s blade is at all times perpendicular to the table since it only executes 90-degree cuts. A miter saw’s shaft or axis, however, swivels. This enables the tool’s blade to cut angles and do 90-degree angles as well just like a typical chop saw.

Therefore, the term chop saw is only used as a generic term. Usually used to refer to the stationary power tool that cuts woodworking materials in a straight downward motion. The miter saw, however, is a term used for saws that can create angled cuts such as mitered and beveled cuts.

As I noted earlier, miter saws are mostly used in the woodworking realm by DIYers as well as hobbyists. A chop saw, on the other hand, is used more in production shops and building sites because it can cut through almost anything.

Pick the best one based on the nature of the job you intend to use the product on.

With that in mind, below is my recommendation of the best chop saw and miter saw. 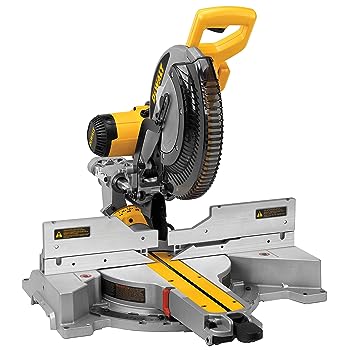 DEWALT DWS780 Sliding Compound Miter Saw is a strong miter saw running on an astounding 15 AMP motor. This awards you the ability to adjust the blade’s spinning speed to cut through all sort of products.

In fact, some customers pointed out this miter saw worked perfectly with plastic, steel, wood, and much more. And by adjusting the speed to your liking, you will be able to execute the perfect finishing touches to any working material.

DEWALT 12-Inch DWS780 Sliding Compound Miter Saw can also cut 12 inches wide and 4.3 inches deep. This is more than sufficient if you want to take on the largest pieces of wood. Most importantly, the bevel angle on this power tool ranges up to 50 degrees both left and right. You can reach multiple angles quickly using the quick release of bevel controls.

What’s more? DEWALT 12-Inch DWS780 is also very safe to use. Its blade is covered using a large and strong automatic cover. It is also never exposed except when you are in the middle of cutting material.

Better yet, the tool is also very durable. Thanks to the fences, bevel system, precision machined casting, rugged guards, and powerful stainless steel miter dent plate. So if you want a miter saw that will serve you for years without worries, then DEWALT 12-Inch DWS780 is the product for you. 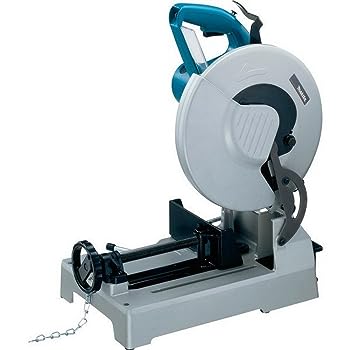 Makita LC1230 12″ boasts an astounding cutting capacity and best-in-class features. This tool can easily withstand any industrial, heavy-duty tasks thrown at it. But most importantly, I realized it could also be used by amateurs without a worry. If you’re an amateur, you could learn the ropes by using the product for home repair applications like tubing and cutting pipe.

In addition to that, the unit is motorized by a reliable 15 AMP motor running on 120 volts. The motor also delivered a max cutting depth of 4.5 inches when used with a high-end compatible carbide-tipped blade. In regards to the blade, the maximum size accepted is 12 inches.

Just like DEWALT 12-inch DWS7800, safety is also part of the picture with this Makita LC1230 12″. This metal chop saw retails with an advantageous lock-off button. This is in place in order to prevent accidental cuts that could be hazardous.

I hope you now understand the difference between a chop saw vs miter saw. This means you will have a better chance of determining which one would best suit your task.

As a general rule, remember that chop saws are larger and more powerful. For that reason, they are mostly used for heavy-duty tasks such as construction and metalworking. Miter saws, on the other hand, are mostly used for lighter tasks like trimming, crown welding, and woodworking work.

What Are You Looking For?

101ToolAdvisor.com is a participant in the Amazon Services LLC Associates Program, an affiliate advertising program designed to provide a means for sites to earn advertising fees by advertising and linking to Amazon.com, Amazon.ca, etc. As an Amazon Associate, I earn from qualifying purchases.